Making the most of it.. 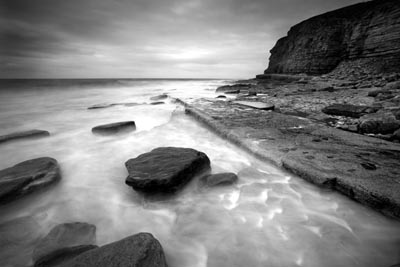 They say that there's no such thing as bad weather. I'm not such an optimist - the past three weeks have been awful so when I eventually managed to escape from the house for a brief session recently, it was a little depressing to see a large bank of cloud on the horizon after what had been a reasonable day. Rather than turn around, I decided to persevere and had an idea to shoot this slipway vanishing into the sea, but in black and white, as the conditions were fairly monochrome anyway.
The long exposure has generated a calm looking appearance to what was a rather windy day with a rough sea.
Although I am quite happy with the image shown, I decided to stick with a slightly different colour image for the gallery, as I prefer the subtle tones of blue and brown. (It is the last image on the Glamorgan Heritage Coast gallery.) If you would prefer it in black and white, that can be arranged.
Both pics were taken with an exposure of around 15 seconds at f16 with the usual 17-40mm lens on a Canon 5D Mk 11. A Lee 0.9 ND filter and an 0.6 ND soft grad were used.
My New Year's resolution was to try and stop taking so many pictures of blurred water over rocks. I've not started off very well.