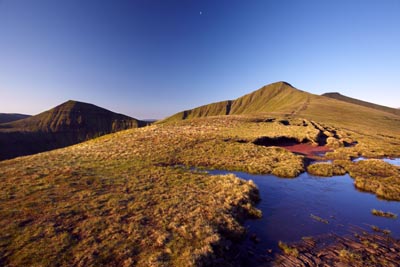 With the promise of a nice day at long last, I dragged myself out of bed at 4am this morning and set off for the summit of Pen Y Fan once more, but this time with a different approach. The sun has moved to the north of East by this time of year and it illuminates the North facing slopes of Pen Y Fan very nicely, so I approached along Cefn Cwm Llwch and returned to the car via Cwm Llwch, a circular walk of 6.7 miles which takes about 4 hours. From this approach you get a view of all three peaks, Cribyn to the left, Pen Y Fan in the centre and Corn Du to the right. Despite the sunshine, it was quite cold at the top and if you look carefully at the pool in the picture shown, you can just see a thin film of ice. You can also see the moon at the top of the frame. Even rising at 4 was not really early enough to catch the best light of the day and by the time I reached the summit of Pen Y Fan at 7.40 am, the sun had already been up for over 2 hours.
Spring is well under way now. The hedgerows are alive with a rich variety of wild flowers, I heard my first Cuckoos for some years and I was able to view a lovely pair of Wheatears, recently arrived back from Africa. Along the walk I was serenaded by Skylarks.
The return journey down Cwm Llwch was as enjoyable as usual; this is probably the most scenic of all of the approaches to the peaks.
The usual 17-40mm was in place for this shot, together with a Lee polariser (thus the uneven tone in the sky, one of the downsides of polarisers).