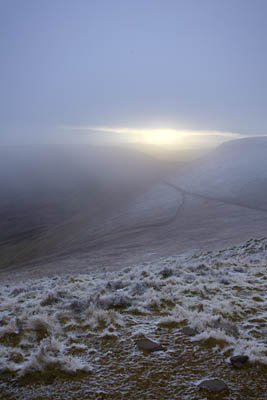 The weather forecast for New Year's day 2013 looked promising, so I decided to head for the peak of Pen Y Fan and start the year in one of my favourite places. I left in the afternoon for a change, more for a walk with my daughter than for photography, but the camera came along of course. When we arrived, as expected about 1000 other people had had the same idea, but most were on the way down as we were going up for a change. At the top, we discovered an unexpected covering of snow and there was a fair bit of swirling mist and low cloud driven by a strong westerly wind. I am always amazed at how different the weather can be at the top of such a small peak (886m). It was all quite atmospheric and once more I imagined myself to be in Middle Earth rather than in Wales. I have a hobbit, sorry, habit of doing that. As we returned from the peak back towards Corn Du, the mists lifted slightly and there was a pale yellow glow as the sun tried to make an unscheduled appearance on the horizon. It didn't last long but it provided a little hope amongst the gloom.
Although we have had a lot of bad weather over the past year, if you make the effort to get out in it, it can produce some surprising results; not always, but sometimes, and those occasional breaks can make for dramatic and different images. Blue sky is all very well, but it can get a little bland and boring after a while (although it is nice now and then!) I'm not one for making resolutions, but if this year proves to be as miserably dull as last year, well so be it, but I intend to get out there and shoot anyway. I also want to do more panoramic landscapes and explore the world of black and white a little more, so watch this space.