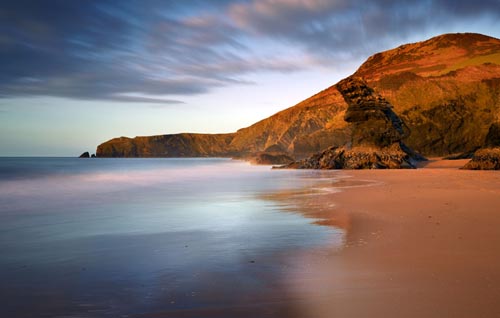 The Ceredigion gallery has been sadly neglected, simply because West Wales is so far away, so last Friday, with a welcome break in the weather at last, I decided to make the trek over there. Facing west, it is best visited in the afternoon, so the day began with a few hours on the fantastic Rhossili beach where I finally managed to capture a few images of the Helvetia wreck that I was pretty pleased with (see the gower gallery). I then drove to West Wales, starting with Tresaith, moving up to Penbryn, both of which I had never visited before, and finishing with Llangrannog, a beach I have visited many times before, but usually with a fishing rod in my hand rather than a camera. Tempting though it was, I left the rod at home this time. (Man who tries to chase two rabbits catches none.) Penbryn was rather a surprise as I had always thought it was just a tiny little cove, however it is a long and very pleasant stretch of sand which I will hopefully visit again very soon.
By the time I reached Llangrannog, the sun was quite low in the sky and only the lower half of the beach was illuminated, but in a rather lovely way as I hope the shot here shows. Images like this are hard to make in the summer months due to all the holiday makers, but a cold day in February meant I had the place almost to myself.
There is a difference between simply recording a scene and making a satisfying image; here I have employed my favourite technique of a long exposure (about 1 minute) to add a little mystery and atmosphere to the scene. As a result, not only has the water blurred, but the clouds have also been allowed to streak nicely.
I have recently purchased a new lens, a Canon 24-70mm f2.8 (the Mk 1, not the hideously priced Mk 11) to replace my Sigma lens of the same focal range, which wasn't a bad lens, but which had a few little issues that I wasn't happy with. This image was made with the new Canon lens which looks set to replace the Canon 17-40mm as my "standard" lens.