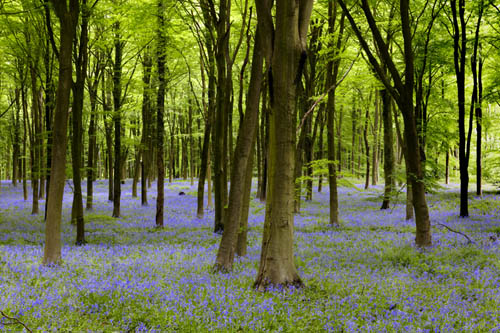 Spring has finally sprung, albeit about 4 weeks late, and in the springtime, this "young" man's heart turns not to love, but to flowers, and specifically bluebells. I have bluebell woods near my home of course, but having visited them almost every year, you long for somewhere new. Micheldever wood is probably one of the more photographed bluebell woodlands in the UK and has graced many a photo magazine in the past. With my daughter at university in Southampton, I now have a good reason to visit for the next few years, so expect to see a bit more of it in the future. It is indeed a very pleasant woodland, managed by the woodland trust and well maintained. The thing I like about it is the space between the (mainly Beech) trees; they are not too tightly packed and they are quite regularly spaced in a most pleasing way. You have to walk a bit to find the best viewpoint and I have to admit that I am not 100% happy with this shot. I had my wife with me at the time so I felt compelled to rush a little; had I been alone, I would probably have spent a good few more hours in search of the perfect picture. The bluebells normally arrive before the canopy is fully formed, but this year, due to the cold weather, they are out under a full canopy, which makes for pretty dark woods. A tripod is essential as shutter speeds linger below the 1 second mark. Blue never looks quite as blue in the final image as it does on location, so a moderate tweak of the saturation slider was needed in Photoshop to restore it to its true splendour.
This picture has been placed in the Flora and Fauna gallery as I don't really have any other suitable gallery for it at the moment. For those who care, a 24-70mm Canon lens was used on the 5D Mk11, with a Manfrotto Neotec tripod. Unfiltered.