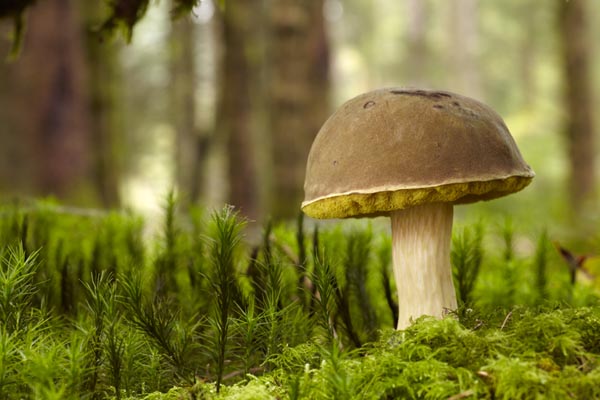 I have always had an interest in fungi. They come in a huge variety of shapes and colours, they are surrounded by folklore, myth and mystery, some can kill you, some make you high, some are just plain delicious, and they make interesting photographic subjects. The main difficulty in photographing fungi, is finding them in the first place. I have a few locations that I visit which provide a reasonable range of species, but finding the more interesting varieties can sometimes take a bit of research, legwork and luck. Photographing them might appear to be easy, but it requires a bit of thought and some muddy elbows and knees to show them at their best, otherwise you end up with just a rather dull record shot. Take this specimen. I am yet to identify it formally, but I believe it is a variety of Boletus. I almost walked past it as it was growing directly under a fallen tree. Finding a specimen like this is pretty exciting to me, as all too often they quickly get damaged by slugs and insects. There is a little damage to this one but not so much as to spoil it. Moving it to a more convenient location goes against the grain - I like to show things as they are and so it was a case of lying down flat on the ground. Fortunately, the ground was covered with a nice layer of moss, which was a little damp, but otherwise comfortable. After doing a little gentle gardening to reveal the whole mushroom, I set about capturing it. I used a Tamron 90mm macro lens for this shot which has blurred the background quite nicely but still managed to retain a sense of context. Shooting from a prone position has given the mushroom a sense of grandeur and made it seem almost on a par with the trees in the background. In actuality, it was about 15cm tall. A Lastolite reflector is an invaluable tool when shooting fungi as it punches a little light underneath the cap, illuminating the gills and stem. I also tried using a wide angle lens up close but overall I prefer this shot. By the end of the session, I felt like I was going cock-eyed with the effort of peering into a viewfinder 10 cm off the ground. Time to buy a right angled viewfinder I think. I could use liveview I suppose, but I prefer looking through a viewfinder. It just seems right.
I also found a few other varieties which will be added to the gallery in the next few days.